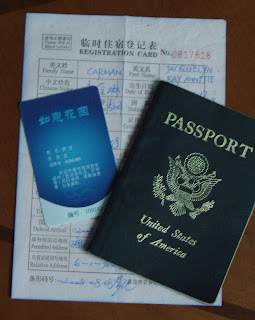 The night before the Olympics started my husband, daughter & I had gone out to visit from friends and were returning home after dark. Since returning from the States the street that leads to our house has been closed with police waiting to stop any cars from going in. But up until now we have never had any problems just walking in. Well, we were walking past the guard and he asked for our ChuRuKa (exit/entry card). We said that we didn’t have one but that we lived right there down the road. The guard answered back saying that we couldn’t get in without an entry card. My husband & I looked at each other not knowing what to do. The police asked us a bunch of questions like how long we have lived here and what not. He then asked for identification. That night I had left the house without my purse. My husband had his wallet which only had his USA drivers license. He gave it to the police who laughed and said “Kan bu dong” (I can’t read this). Finally he let us go through with a promise that we would get a churuka the next day.
I was a little nervous because I was going to have to do this all myself since my husband had to work. I gathered what I thought was the necessary paper work and asked my helper to come along to help me. She took me to the police station and brought me to the correct desk. I showed her my paperwork and she said “where is your HongDanZi” (literally trans. red card). Not really sure what that was I said that we didn’t have one. She then told me that I had to have one of those first and pointed me to the back office where I could get one. I figured that “HongDanZi” meant registration card and called Jeremy to see where ours ways. Thinking it was as school I asked him to have someone bring it to me that afternoon. The police said that they would put me in the system to get a card but I had to bring my registration card (hong dan zi) back to show them.
As I was waiting for the woman who was supposedly bringing me our registration card I found out that we didn’t have one at all but that she was going right then to get them for us! When she returned with our registration cards I headed straight to the police department (bringing a couple of others with me to help them through the process). After arriving I discovered that they didn’t need to see my registration at all, but I was able to help the people I brought with me. The police told me to come back between 5 & 6 that night to pick up my card.
Even though it was a crazy day of running around I had fun. I ended up going back & forth from the police station 4 times (and once I had to run the whole way) by the end of the day. I enjoyed helping others out with the process and felt like I accomplished a lot by the end of the day.