So, an interesting thing has been happening lately when I play basketball. Well, ok, I won’t exaggerate…it’s happened twice…but I still think it’s interesting. I’m not sure of the psychology of it all and what it means. So, I’m gonna try to process it.

Since moving back to the States, I’ve been able to play basketball pretty much on a weekly basis. I haven’t played this regularly since I played basketball in high school. I love it! Not only do I get to play my favorite sport, but I also get the exercise that a sit-behind-a-desk-for-8-hours-a-day guy needs. I play at my church. They have a “shoebox” gym that’s about ¾ or less the size of a real court. On any given night, we’ll have between 4 and 12 people come out and play. 12 is a bit much in such a small place, but we make it work.

Most agree that I’m a pretty tolerant guy in general. It takes a lot to get me mad. In basketball, as long as you’re playing hard and can take as much as you can give, I don’t have a problem with fouls. I won’t call a foul unless you really got me or made an audible slap sound.

Others…well, they’re not so tolerant. Some people just get frustrated by it. They’ll call the “ticky-tack” fouls, or start complaining. Still others escalate the situation by purposely fouling back as a sort of frustrated retaliation. It’s with this final group that I’ve noticed an interesting trend. (Ok, “trend” is a bit strong for a 2-time occurrence, but that’s the word I’m going with.)

So, the situation is this. I’ve got the ball…dribbling, juking, breaking ankles, etc…. Out of nowhere a guy, aka the “escalator”, on the other team – not the guy who is supposed to be guarding me, mind you – comes up and hacks my arm off or pushes me while vaguely attempting at the ball so that I’m forced to call a foul. I call the foul. I then get an earful about how the guy that’s guarding him is fouling. Again…not me fouling, but a different guy on my team. Seriously? You’re gonna come foul me because your guy is fouling you?

Of course, this is pick-up ball. There aren’t any refs. So as a player, you have several options when a foul occurs, you can, 1.) call the foul, 2.) complain and pout, 3.) escalate it by purposely fouling back. And I’m gonna go ahead and add a 4th option – go find and foul J-Dogg.

Option #1 usually solves the problem and everyone has a good time. Options #2, 3, and 4 ruin the game and everyone goes home mad. Here, I’ve made a diagram for you to see: 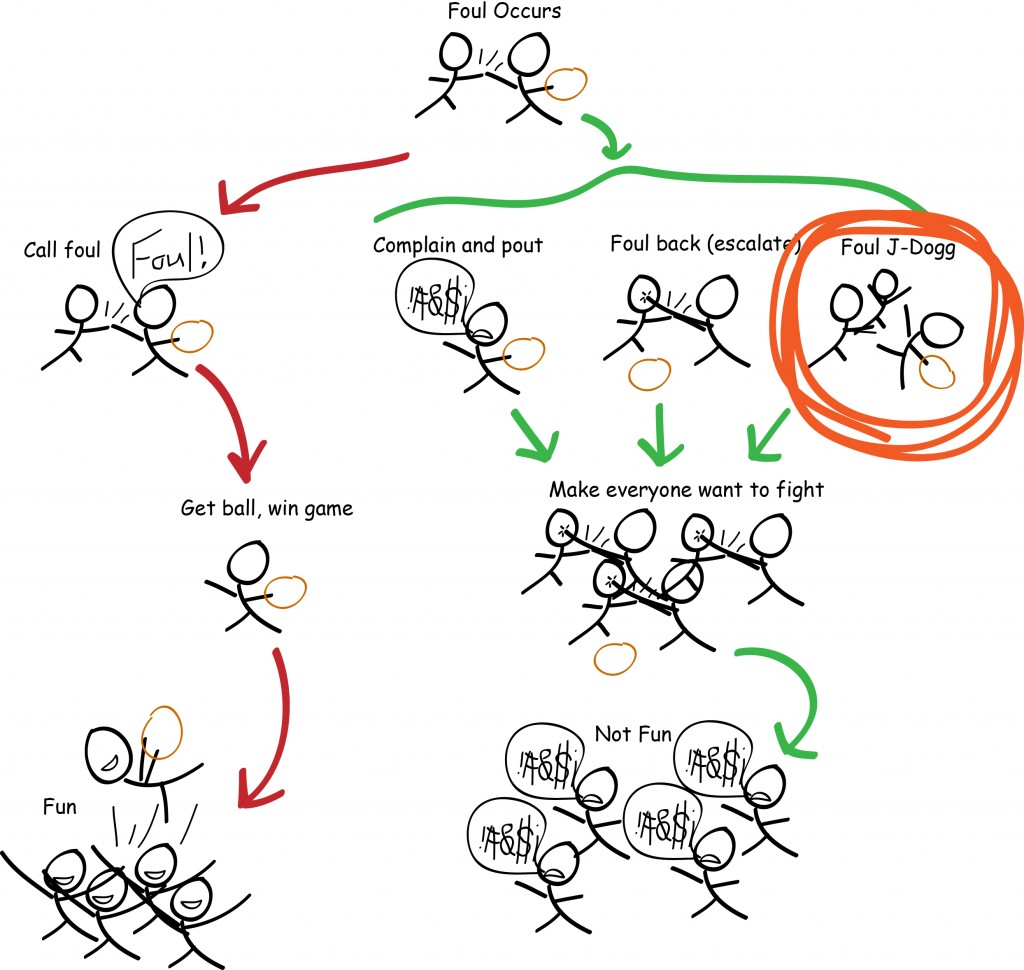 So, looking into this a bit further. What’s the deal? Why am I getting fouled when I didn’t have anything to do with the play? It wasn’t me that fouled in the first place.

The ego in me wants to say, “Everyone looks to me as the leader, so it’s their way of crying out.” But, unfortunately, there are two problems with that: 1.) I’m not the leader. This isn’t my show, I just show up. 2.) What kind of “leader” has a group of followers who punch him in the face when they need to cry out?

Then, on a slightly less egotistical trip, I think maybe it’s because I’m the gentle giant. (At 6’3″, I’m usually one of the tallest on the court.) The aggressor acknowledges that flying off the handle probably isn’t the best thing to do and seeks out the gentle giant to prove a point and maybe mister giant will take his team member aside and convince him to stop fouling. But again, in this scenario, that makes me the leader, which was already proven wrong.

Perhaps, though, I’m on the right track with the whole gentle giant thing. But maybe they’re not really looking to me as the leader. I don’t think the “escalators” want fly off the handle, but they certainly are getting frustrated. Perhaps they realize that pushing or punching the guy who is frustrating them likely means that a fight or argument will ensue. So, subconsciously, they find the guy who is least likely to punch back and take him out. It’s a sort of last resort to actually fighting with the actual culprit.

Yep, I think that’s what it is. It’s not that I’m the leader, but that I won’t punch back.

Wait…no…that’s not going to work. Since, I’m defining my own words here (see “trend” above), I don’t think I’m a “wimp”.

Oh, what the heck…just call me “Leader”.

2 responses to “Fouling the Leader”