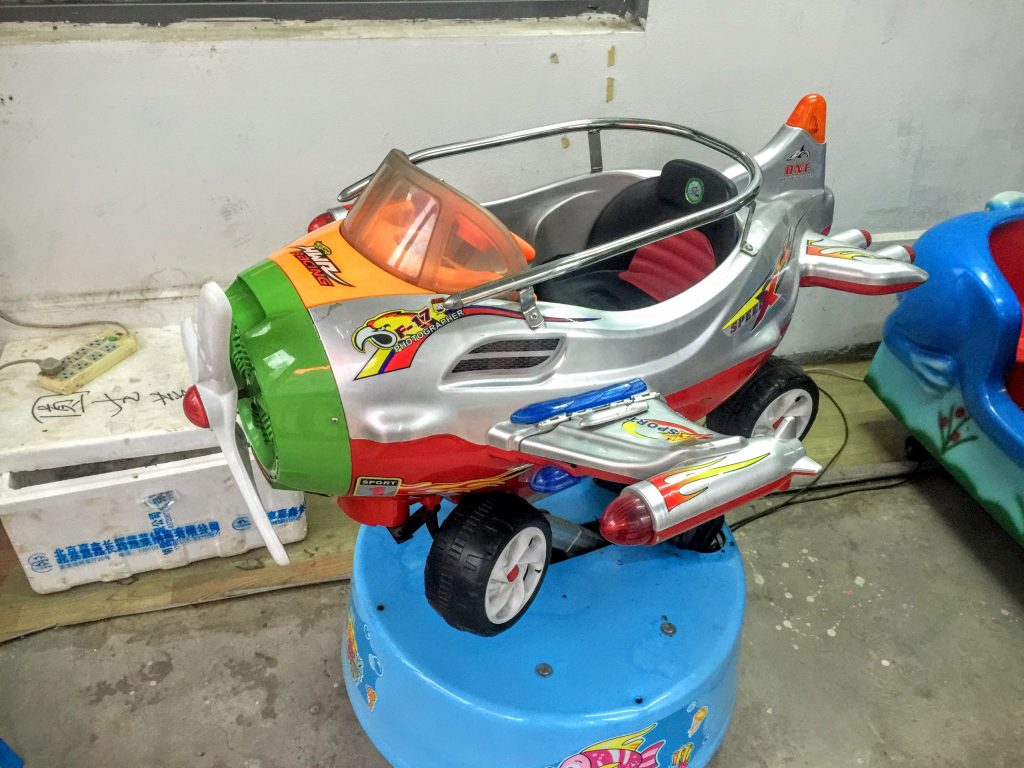 These types of toys are all throughout China. They turn and light up and vibrate and play annoying songs, like Happy Birthday, or Jingle Bells. (You can’t sing the birthday song when somebody’s not having a birthday…that’s like rule #1 of songs, man!) We never give the kids a coin to play on these toys, mostly because they’re kiddie toys…but also because I don’t really don’t want to pay for it. (Remember when your mom or dad would say they didn’t have any money at the restaurant for an arcade game or gum ball machine, but somehow had money to pay for the meal? Yeah, that’s me now.) But it turns out I was right, they are indeed kiddie toys. I know this because when my 5-year-old got on the toy, he snapped it basically in half.

The lady running the play area called me over and showed me that the toy was broken and then called her own son to come over to take a look at it to see if he could fix it. He couldn’t. I asked him if there was someone we could call to get it fixed. There wasn’t. I said, “怎么办呢？” (What do we do, then?) and he said with a hint of frustration, “你可以修吗？” (Can you fix it?). He obviously doesn’t know me very well…that fixing stuff like that is well outside of my ability. So I asked him how much it costs to buy a new one. He said 3800 RMB (USD $585). I said, maybe I could fix it after all…

I told him that I needed to go to the hardware store to get a tool to be able to take it apart a bit more so I could figure out where exactly it was broken. (Up this point I didn’t know how messed up it was.) He didn’t really want me to let me leave. How would he know that I wouldn’t just disappear? I reasoned with him that I lived just upstairs and told him my address and phone number. He was still against me leaving. Finally, the lady running the place came back and convinced her son to let me go because she knew us quite well.

I went out and was not able to find the tool that I needed at the hardware store. I started making calls to people I work with to see if we could find someone that could take a look at it. Finally, one of the guys who works with alot of contractors said he could help us out with finding someone to fix it.

This situation is pretty common in China. Liability is not something that’s taken care of later at the hands of an insurance company. I doubt very seriously that these people have insurance for this type of thing. The person in the wrong is usually dealt with right away. You see it with car accidents all the time. Often times the policeman that comes to the scene (if it ever gets to that point) is there simply as an arbitrator. Usually after a bunch of yelling back and forth the policeman suggests an amount that should be given as compensation and it’s settled and done with.

In some ways it’s nice to have things taken care of right away. In other ways it can be a bit stressful…especially for a conflict-avoider like my self. But in other ways, when your son breaks something and you don’t know how to fix it and the guy doesn’t want you to leave, it can be a pain.

In the end, after a couple of weeks, we were finally able to get the toy fixed by hiring someone to weld the piece that was broken. It cost about 30 RMB (less than $5) for the welder’s time, which is much better than $550! The lady still smiles at us as we walk by, but I don’t think my boys will be going back there any time soon. My kids are just a bit too big and wild for that place.