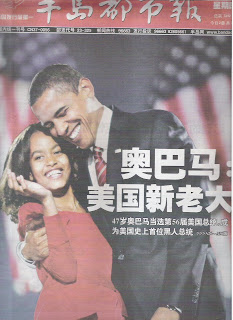 奥巴马 (Obama – pronounced: “Au-ba-ma” in Chinese) made the front page of our local city’s newspaper. Not only did he get the front page, but he also got a section-A, 4-page spread.

At the corner store today, I showed the fruit-seller-guy the newspaper and asked if he thought Obama would be better than Bush (**Most Mainland Chinese people don’t like Bush). He said, “There’s no way to tell. He’s not president yet”. Although people in both parties are making their predictions of Obama’s future grand success or utter failure, this Chinese guy has voiced what is probably the most honest, non-partisan remark possible. In other words, “We’ll have to wait and see.” 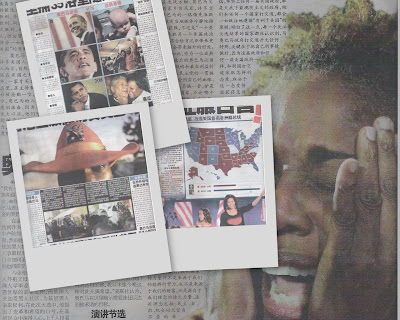 Here are a few of the other headlines (These are my own translation…could be a bit off):
-Black horse puts on White house
-Obama: I have a dream
-Black man rules the roost, but the “white” in White house remains
-From “little poor baby” to big president
-Kenya takes holiday to congratulate Obama

*Notice the misprint on the front page. It says Obama is our 56th president. The last I counted, he’s actually only the 44th. Hmm, not sure if the local papers can be trusted…

**One of the first things Chinese people ask you is, “Where are you from?” Of course my reply is always, “America”. More often than not, the next thing out of their mouth is, “布什不好” (Bu shi Bu hao), meaning, “Bush is Bad”.